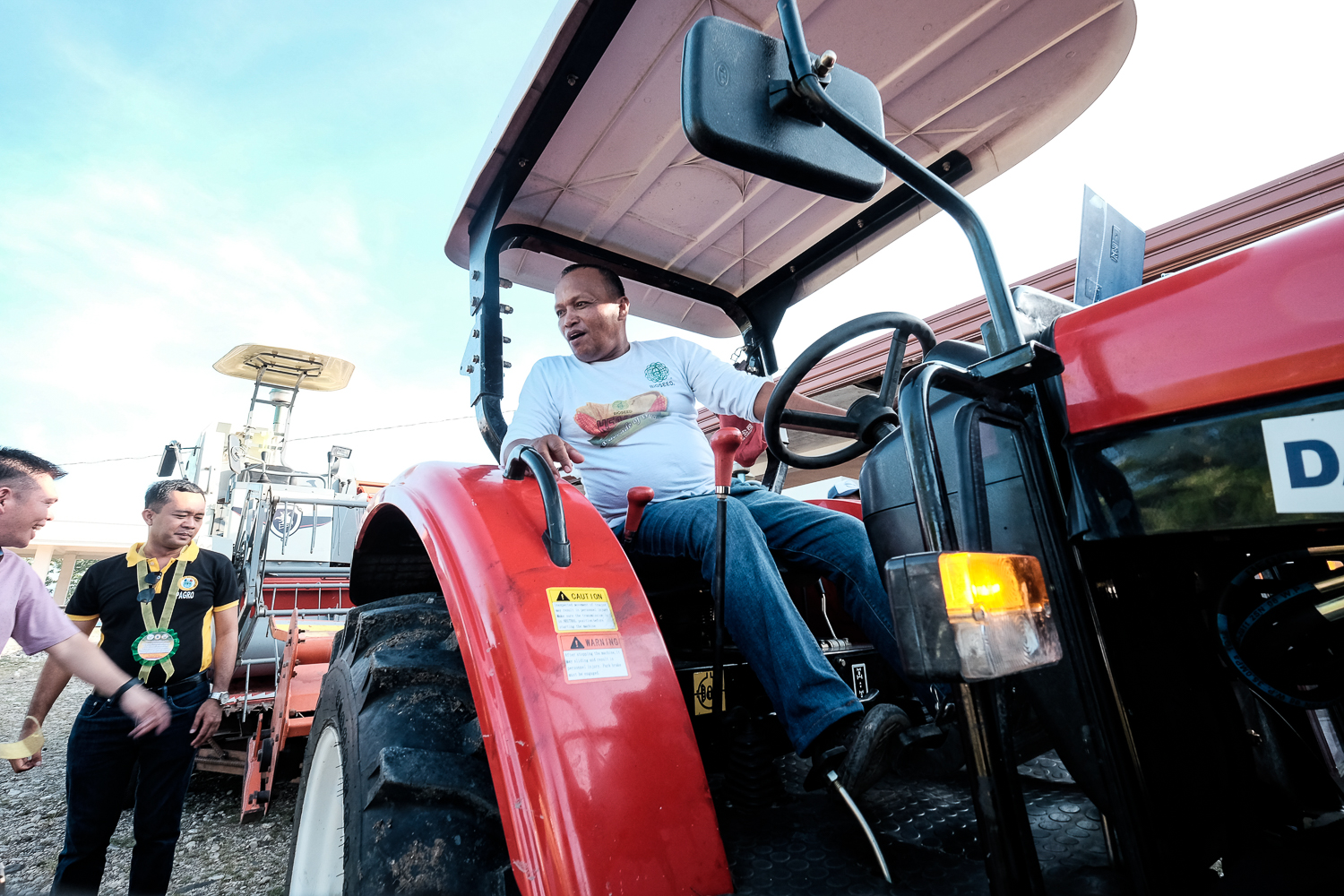 
DAVAO ORIENTAL – In a bid to improve the province’s agriculture sector by empowering farmers to secure abundant harvests and increased income, at least P30 million in agriculture support interventions have recently been turned over to farmers’ associations in four municipalities here, benefitting more than 4,000 farmers.

During the recently held turn-over ceremony and rice harvest festival, the farmer beneficiaries in the towns of Caraga, Baganga, Cateel, and Boston have warmly welcomed the support interventions ranging from farm machineries such as rice harvesters, rice polisher, tractors, rice mill, and corn mill; fishing boats and implements, carabao livestock and farm inputs such as rice, corn, and chili seeds, fertilizers, oil palm seedlings, and farming tools, among many others.

Recognizing the huge significance of mechanized agriculture as the main key to food security and increased income, among the highlight interventions being turned over was the P 5.3 million Village Type Drying Facility with Generator Set to benefit at least 150 farmers of the Tayudong Farmers Association who cultivate more than 120 hectares of corn fields in Barangay Salingcomot in the municipality of Baganga.

The mammoth facility which has the capacity to process up to 10 tons of wet corn cob per cycle or 150 tons in a month will ensure farmers to have dry and quality produce which they can also sell at a quality price. Aside from increasing the income of corn farmers, the facility will also generate jobs among the locals.

Department of Agriculture XI Regional Director Engr. Ricardo Oñate Jr., who led the turn-over ceremony, said that the provision of agricultural support is part of the department’s thrust to increase the income of farmers which also perfectly coincides with the Provincial Government’s drive to improve the yield and income of the farmers.

He said that the turn-over is only the start of the downpour of more interventions for the agriculture sector in the province, particularly accredited cooperatives and associations. “We anchor all our interventions with the Food Security Plans of the LGUs and we coordinate with agencies like the National Irrigation Authority to maximize our interventions, avoid duplication and waste of resources,” said Director Oñate.

While there is also a huge intervention on rice, Director Oñate added that the department is also encouraging rice farmers to upgrade to selling rice instead of merely selling rice grains or palay in order to maximize income.

Provincial Agriculturist Rotchie Ravelo said the province remains rice sufficient which is currently at 93 percent. This amidst the challenges posed by climate change and the effects of the Rice Trade Liberalization Law causing stiff competition in terms of rice pricing and quality.

Despite these challenges, Mr. Ravelo is optimistic that the province will be able to pursue its goal of moving towards long-term rice and food sufficiency. “I am confident with the support of Department of Agriculture and all other agencies that we will be able to help our farmers and at the same time address poverty and secure sufficient supply of food for all,” said Ravelo, noting that the bottom-line of all government interventions for farmers boils down to making a dent on poverty by increasing harvest and income for the farmers.

Meanwhile, food sufficiency on other crops except vegetables have also maintained with corn sufficiency at 163 percent and fisheries at 88 percent.

As national agencies and local government units are now aligning their efforts to President Rodrigo Duterte’s Executive Order 70 or Whole-of-Nation Approach to end insurgency and foster sustainable peace, the recent massive turn-over of agricultural support also has its peace and order component on top of the goal of fighting poverty and secure food sufficiency.

Demonstrating convergence and partnership, the projects were implemented under the Pagkain at Kita Sustainable Agriculture Village Enterprise (SAVE) Program of the Provincial Agriculture Office, which is mainly funded by the Regular Program and Bottom-Up Budgeting (BUB) Program of the Department of Agriculture and the Payapa at Masaganang Pamayanan in Agrarian Reform Areas (PAMANA-ARA) Program with counterpart funds from the Provincial Government and the municipal local government units of the four municipalities.

“All our efforts are aligned to the President’s Executive Order 70,” Dir. Oñate said, adding that the department has programs on the pipeline that are set for the indigenous people’s communities in Certificate of Ancestral Domain Title (CADT) areas. “We are doing this because the IPs are the most vulnerable to recruitment. Through our efforts, we are hitting two birds with one stone – that is addressing the livelihood program of our IP brothers and sisters and at the same time addressing the issue of peace and order,” said Director Oñate. “We don’t only end conflict but we mean to also end poverty,” he added.

While the department is exploring agricultural opportunities for the IP communities like planting OPV white corn or upland rice, Dir. Oñate emphasized that the market must be secured first, adding that the agricultural interventions will strictly adhere to indigenous cultural practices.

Committee Chairman on Agriculture and Food of the Provincial Board, Laureano Taya, who represented Governor Nelson Dayanghirang, extended the Governor’s gratitude to the department’s overwhelming support to the farmers.

He said that these projects, which were first requested to the department during the time of Former Governor now First District Representative Corazon Malanyaon, will greatly help the farmers in the four towns who are still recuperating after almost six years since the devastating Super Typhoon Pablo hit the province in 2012.

Meanwhile, farmers are all praises for the downpour of government interventions to address poverty in their once calamity-stricken towns.

Ronnie Ongcoy, chairman of the Tayudong Farmers’ Association in Barangay Salingcomot in Baganga town, has extended his heartful thanks for the assistance that the government has provided to them. “This will definitely help us secure additional income for our families. We thank the people behind this project and the government agencies who served as our bridge in reaching our dream of getting this mechanical dryer facility,” he said. By Karen Lou Deloso/Photos by Eden Jhan Licayan