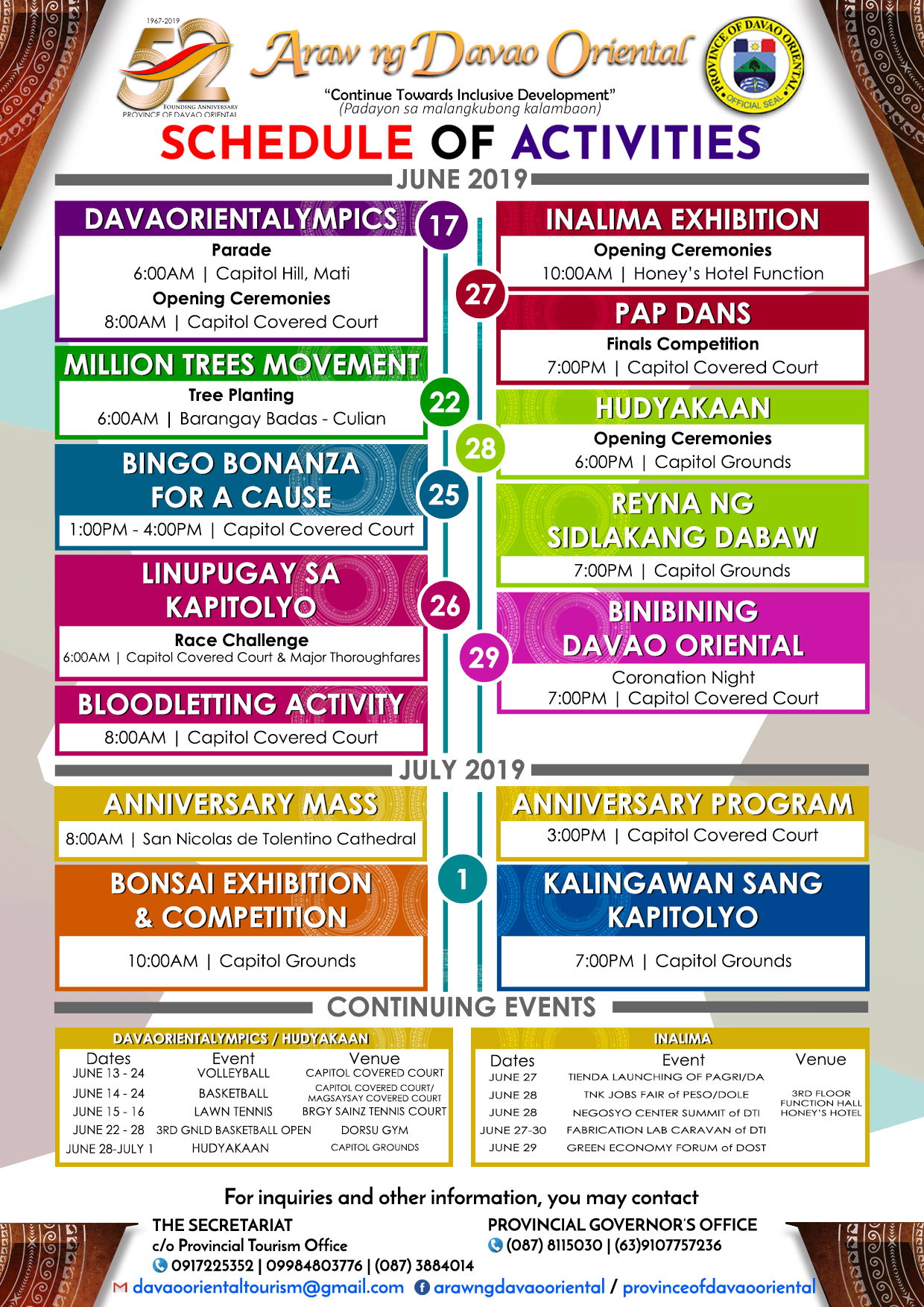 
DAVAO ORIENTAL—The whole officialdom of the Province of Davao Oriental is now gearing up for its biggest and most anticipated event of the year – the 52nd Founding Anniversary celebration.

Slated for the month-long celebration are series of exciting and fun-filled events anticipated to be participated by Capitol employees, workers from national agencies and participants from all ten municipalities and city of the province.

The countdown for the celebration has officially began this morning, June 17, with a sporting event dubbed as “Davaorientalympics”. Featuring various sports events that will foster sportsmanship among all employees, the “Davaorientalympics” will run until June 28. Sports events will include basketball, lawn tennis, and volleyball, among others sports.

The traditional annual tree planting dubbed as Million Trees Movement will take place on June 22 along Barangay Dawan Highway up to Barangay Culian in the City of Mati. The area was chosen because of its location being prone to landslides.

Scores of fun-filled activities will ensue which include a Bingo Bonanza for a Cause which will be held at the Capitol Covered Court on June 25. The proceeds of the game will be donated to the Province’s Reception Center and Diagnostic Center (RSDC), a center for abused women and children and the Balay Silangan Bagong Bahay Para sa Bagong Buhay Drug Rehabilitation Center.

A racing event called “Linupogay sa Kapitolyo”, which was newly added to the series of activities slated for the anniversary celebration, will happen on June 26 at the Capitol Grounds. On the same date, the Philippine Red Cross (PRC) will spearhead a blood-letting activity at the Capitol Covered Court.

The annual Inalima Exhibition, a trade fair spearheaded by the Department of Trade and Industry (DTI), is scheduled on June 27 at the Honey’s Hotel Function Room. This event will feature various local produce of farmers and traders from all over the province. To be held simultaneously will be a local dance competition dubbed as “Pap Dans”.

To provide a time for relaxation and entertainment, the “Hudyakaan sa Kapitolyo”, which will open in the evening of June 28th, will showcase live band performances from local and regional talents. On the same night, the gay community will also flaunt their wits and beauty in a pageant dubbed as “Reyna ng Sidlakang Dabaw.”

This year, a new “queen” will reign as the 52nd Founding Anniversary celebration will stage the 2019 “Binibining Davao Oriental”, which is one of this year’s most-anticipated events. The winning beauty will be crowned during the Coronation Night on June 29.

The Anniversary Program on July 1 will start with a morning mass at the San Nicholas de Tolentino Cathedral. At 10:00 in the morning, Bonsai exhibition and competition will take place at the Capitol Grounds.

The anniversary program will then ensue in the afternoon at the Capitol Covered Court where Governor Nelson Dayanghirang is set to deliver his State of the Province Address.

To cap the celebration will be the “Kalingawan sang Kapitolyo” at 7:00 in the evening, presenting the spectators with Grand Fireworks Display at the Capitol Grounds. 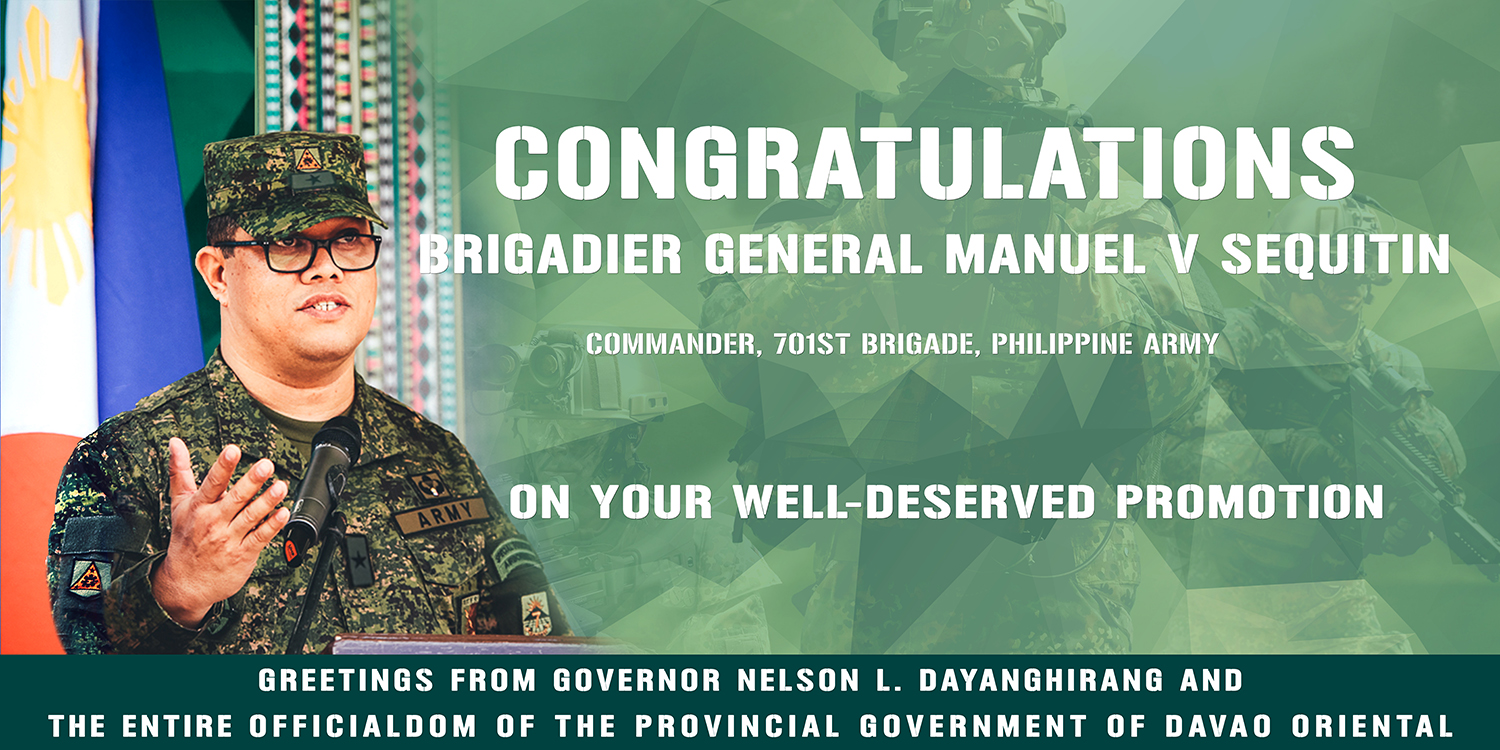