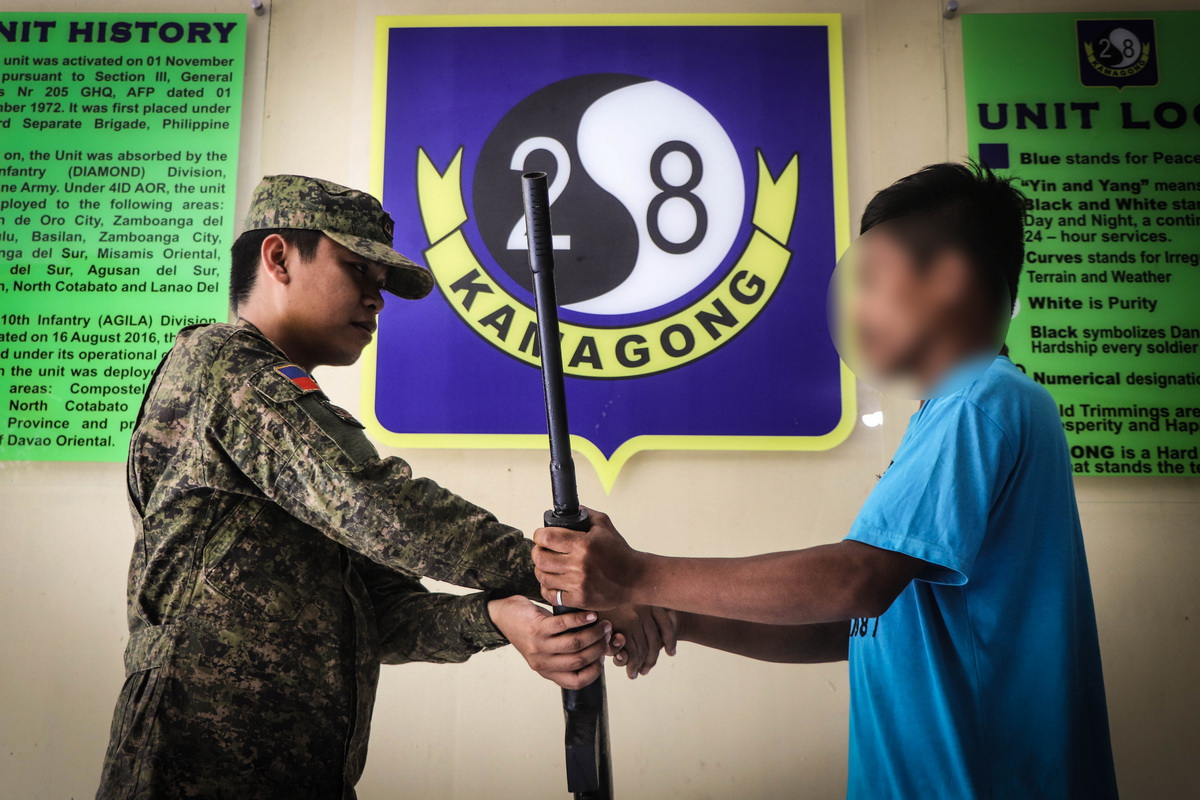 
DAVAO ORIENTAL – Six members of the Communist New People’s Army and Militia ng Bayan have recently yielded to the government to “escape the horrors, struggles, and lies” inside the armed movement.

Assisted by barangay officials, the rebels who surrendered to Governor Nelson Dayanghirang last week are now temporarily under the care and custody of the Philippine Army.

Commanding Officer of the 28th Infantry Battalion Lt. Col. Alexander Banatao, who warmly welcomed the rebels to his camp, said the surrenderers also led his troops in recovering the firearms the rebels hid in a hinterland where they used to operate. The firearms include one M16 rifle and one homemade shotgun. Lt. Col. Banatao said the surrender of these rebels “means a huge victory for the government’s peace and development campaign.”

Of the six who voluntarily surrendered, one was an NPA squad leader while the other one was a team leader. Thirty-year-old Jan-jan (not his real name) said he and his comrades fled the armed group because they could no longer bear the hardships they had encountered while being in the insurgent group. “We experienced hunger, fatigue from days of walking, and sleepless nights – all mixed with the fear over our lives and our families,” a teary-eyed and emotional Jan-jan said in an interview as he recounted his painful experiences inside the armed movement.

With nothing but the clothes on their backs, the rebels left their hinterland sub-village in Barangay San Isidro in the municipality of Lupon, as they finally decided to surrender in the morning of September 18.

Jan-jan, who served as a team leader said he only stayed with the NPA for over a month. He said he was easily enticed to join the rebel group since he was already an active member of the Underground Mass Organization for almost three years in his hinterland sitio which is far away from the government center. He said that their impoverished lives which was taken advantaged by the deceit of the NPA cadres fueled his anger against the government.

He said that among the tasks given to them were to do errands like buying rice and other supplies needed in their camp.

A farmer living on a meager income, Jan-jan said he was also persuaded by the NPA leaders’ “empty promises” which include building of a school, provision of financial support to their families, and develop their livelihoods by forming a cooperative. “They promised us a good life for our families. But none of those promises ever came true.”

He said that weeks after they deserted the group that camped high up in the mountains, they went back to their old lives in their village. However, their peace was short-lived as NPA cadres were relentless in persuading them back to the insurgent group. As members of the Militia ng Bayan, their mission was “to attack government soldiers and plant bombs” – a thing which he said he “abhorred already.”

“I pondered over the safety of my family. As I decided to cut ties with them (NPA), I eventually mustered the courage to surrender to the government,” he said.

After seeking the help of barangay officials who immediately endorsed them to the authorities, they were handed over to the government troops who fed and took care of them. “We are well-fed here. The soldiers treat us very good. They are very nice to us contrary to what they (NPA) taught to us while we are inside the movement,” he said.

Governor Nelson Dayanghirang, who earlier met the rebels in his office at the Provincial Capitol, has thanked the surrenderers for “choosing the right path and making the right decision”.

For the former rebels, supporting the government and abandoning their life as insurgents was the best choice they ever made.

Now awaiting proper documentation, they are all set to be turned over to the 701st Brigade’s Ugnayan Center to undergo a ten-day de-radicalization course in preparation for their enrollment to the government’s Enhanced Comprehensive Local Integration Program (E-CLIP) wherein they will be housed in the Happy Home, a rehabilitation facility for former rebels. At the Happy Home, they are set to undergo series of trainings, rehabilitation activities, and receive scores of benefits including livelihood and financial assistance. They are also eligible to avail of the government’s housing program for former rebels.

The former rebels who have now chosen the path of peace thanked the government for accepting them to the program. They said they are now “filled with hope to start over” with their lives together with their families.

The former rebels have called on their former comrades in arms who are still fighting up in the mountains to give up the “meaningless” armed struggle. “There is nothing to gain from joining a useless fight,” said Roel (not his real name), one of the six surrenderers and a former NPA squad leader.

Furthermore, Lt. Col. Banatao said that the incident demonstrates the people’s increased level of trust and confidence to the government with former rebels banking on government officials’ help to seek refuge and protection.

He also appealed to the people in the villages to help monitor and report any suspicious elements in the area so that government troops can immediately shoo them away.

Pushed to the Boundaries

Amid the intensified focused military operation coupled with its Community Support Program along with the provincial government’s initiatives on the peace campaign, armed rebels are now being pushed to the boundaries of neighboring provinces of Davao Oriental with their manpower rapidly dwindling. For the later part of 2018 up to present, the military has successfully cleared 12 barangays here which led to the dismantling of Guerilla Front 15 and Pulang Bagani Command 6.

701st Brigade Commander Brigadier General Manuel Sequitin said this indicate that “we are one step closer to our long-desired peace”.  He added: “In line with the surrender of six members of the New People’s Army, we will continue to support them and make sure that their second chance to return to the mainstream society will happen. Moreover, we encourage other rebels who are still enduring the hardship in the mountains to return to the folds of the law. The gates of the 701st Infantry Brigade are always open. The core objective of our efforts is to continuously promote the peace and development in the province of Davao Oriental. By Karen Lou Deloso/Photos by Rhea Shane Laureano and 28th IB CMO