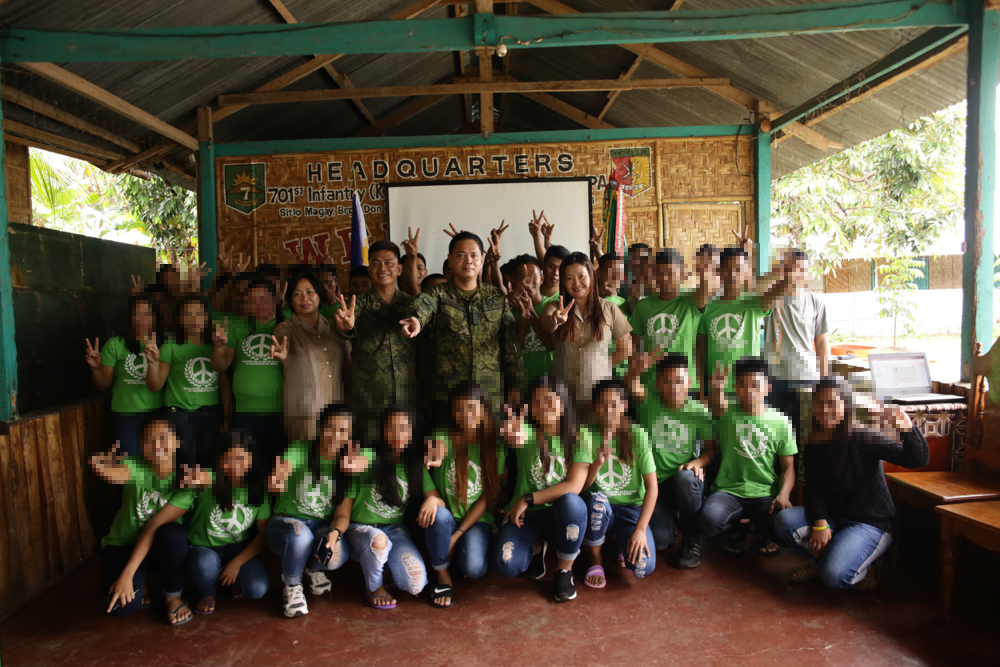 
DAVAO ORIENTAL—A total of 45 former rebels who are the newest batch of rebel surrenderees are now ready to continue the next phase of their rehabilitation as they completed the ten-day de-radicalization course.

During the graduation ceremony held at the Philippine Army’s 701st Brigade Headquarters in Sitio Magay, Barangay Don Martin Marundan in the City of Mati on April 16, former rebels together with their parents expressed their thanks to the military for the warm welcome they have received despite being previously involved in the Communist revolutionary movement.

Col. Rodolfo Lavadia, Jr., 701st Brigade’s Deputy Commander, who led the graduation rites, congratulated the graduates and wished them well in the next phase of their rehabilitation.

The ten-day de-radicalization program, said Col. Lavadia, is an initiative of the Philippine Army intended to complement the services rendered at the Provincial Government-run Happy Home—a halfway house for former rebels situated only a stone’s throw away from the military camp.

He said that before they (former rebels) are turned over to the Happy Home, they are first admitted to the Brigade’s Ugnayan Center wherein former rebels are reintroducedto the Philippine Constitution and to spirituality, among others, which have all been stripped off from them while inside the insurgent movement.

“The program was specifically designed to get rid of the twisted doctrines of communism instilled on their minds,” he said, adding that through the de-radicalization program, former rebels become more receptive to healing and therapy at the Happy Home.

Under the De-radicalization program held at the military camp’s Ugnayan Center, FRs undergo meticulously programmed daily activities including lectures on scores of topics such as socio-economic theories. A devotional session is also incorporated in the course.

After the graduation, the former rebels will be turned over to the Happy Home wherein they will stay for two months to undergo further rehabilitation. The Happy Home, which was inaugurated on 2013 by Former Governor, now First District Representative Corazon N. Malanyaon, offers enabling services for former rebels’ total healing, rehabilitation and preparation for their complete reintegration and transition to a civilian life.

Complementing the national government’s Comprehensive Local Integration Program (CLIP), , former rebels will receive holistic government services that include medical and psychiatric services, counseling, education, sports development, spiritual enlightenment program, and livelihood and skills training. The 45 graduates of the de-radicalization course will be the first batch of beneficiaries of the CLIP for this year.

Aside from these services, the former rebels will receive a total of P65,000 immediate and livelihood assistance under the CLIP, which is the government’s way to help former rebels start anew and persuade others more to surrender.

One former rebel said he is thankful to the government for welcoming them to the reintegration program despite their former involvement to the communist insurgency. He said he surrendered to the fold of the law as their “life in the movement seemed to have no direction due to the rampant killings of our Filipino brethren and being always on the run from the government troops who continue to chase us.”

“I am happy that I surrendered to the government as we will be provided with much assistance in getting back to the community. Back in the communist movement, we were promised with many things which they did not fulfill. We were threatened by our superiors that we will be ill-treated by the military personnel if we surrender. But now I can truly attest that what they told us are all lies as we were warmly welcomed here and were never ill-treated,” said another.

Col. Lavadia said that turning the insurgents into peace advocates is one of the peace and development strategies of the Provincial Government here under the leadership of Governor Nelson L. Dayanghirang. Since the Happy Home started its operations in 2013, more than two hundred former rebels have been provided with livelihood assistance and trainings under the CLIP.

Meanwhile, the parents of former rebels who witnessed the ceremony have called on the leaders of the CNTs to stop the rebel recruitment particularly among the youth and instead avail of the government programs by giving up the armed struggle. “They should stop taking advantage of the youth especially those illiterate and impoverished ones. The youngsters are supposed to be studying in school, preparing to be the future leaders of our country, not in the mountains fighting for the twisted ideologies only their corrupt leaders would benefit. I challenge them to avail of this program of the government and stop sowing terror,” said one parent. Photo by Eden Jhan Licayan