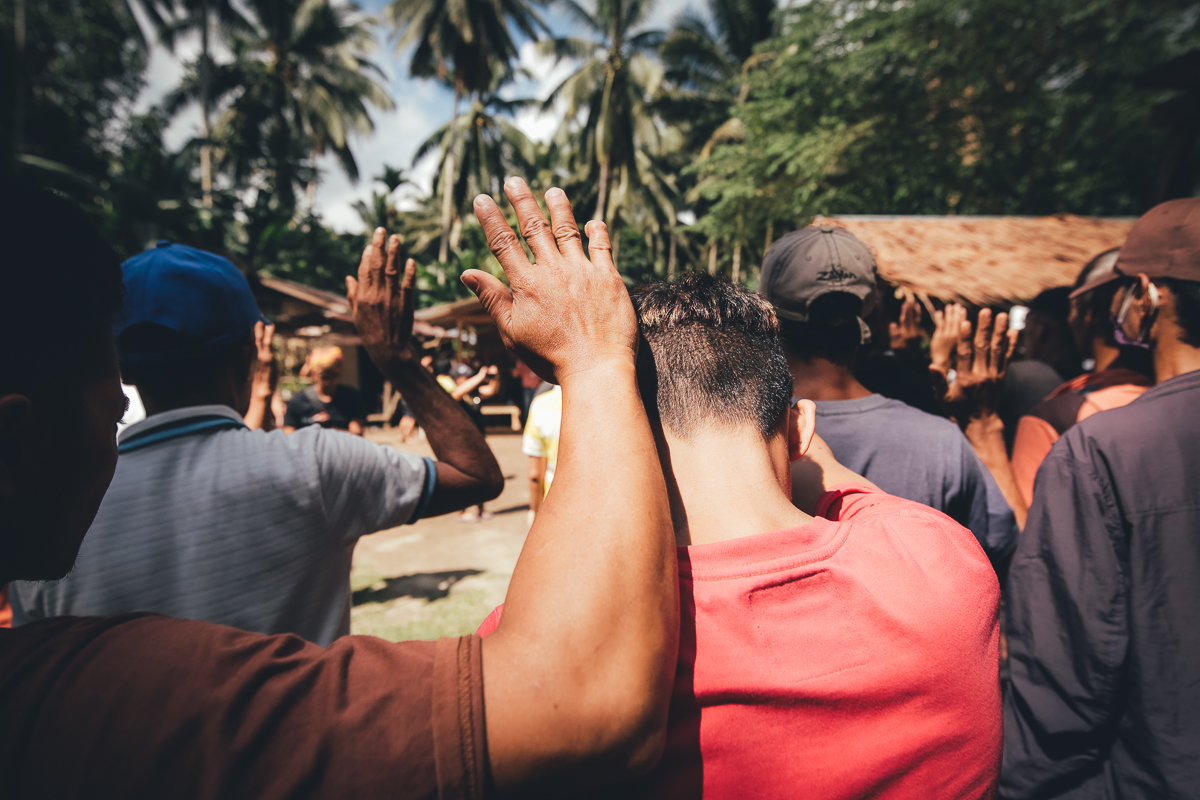 
SITIO SIGANG, LUPON, DAVAO ORIENTAL –– A hinterland community, which was once considered a hotbed of the Communist armed conflict, anticipate seeing better days ahead as the former mass supporters of the New People’s Army (NPA) in the village have openly rejected the Communist-Terrorist group and pledged loyalty to the Philippine government.

On Wednesday, November 11, more than one hundred residents from four far-flung sub-villages of Manaybanay, Piyagdugan, Catumbal, and Sigang belonging to Barangay Maragatas, Lupon, Davao Oriental, have voluntarily vowed their support and commitment to the government and promised to turn their backs on the rebel group. They were warmly welcomed by Davao Oriental Governor Nelson Dayanghirang in a small gathering held at Sitio Sigang.

Said to be the first in the region and even in the whole country wherein an entire community has disowned the Communist influence, Wednesday’s mass declaration of support to the government was described by the residents as one of the most significant occasions in their village’s history.

“Today is truly meaningful for all of us here,” said a teary-eyed Mita (not her real name), 35, adding that coming out clean with the authorities has eased a heavy burden in her heart.

For decades, the villagers here endured a disadvantaged condition which was worsened by its geographic location away from the town center and the poor road condition — making it the perfect breeding ground of the Communist armed rebels who took refuge in the area while easily gaining the villagers’ sympathy and support.

Mita and the rest of the villagers were among the many victims of the NPA’s deception as they were lured to support the group who claimed, through political indoctrination, that they are the “true soldiers of the people.”

As mass supporters, the residents were usually tasked to run errands or provide food for the rebels. “Later, we realized that their words and ideals did not go with their actions. They only brought chaos in our community,” said 26-year-old Jake (not his real name) who became a civilian supporter of the NPA when he was only 16.

Meanwhile, Mita recalled that years back, their entire village was engulfed with fear, especially when there were violent encounters. “Many times we were forced to flee. Sometimes we evacuate to the barangay; sometimes we sleep in the forest. I pity my children who suffered a lot. What we endured was no joke,” she said.

Provincial Task Force to End Local Communist Armed Conflict (PTF-ELCAC) Mr. Ednar Dayanghirang said that the community has a long history of armed violence with five violent encounters between the NPA and the government forces in this year alone.

“That’s why it is important that we reach the NPA’s civilian supporters,” he said, adding that without the mass supporters who serve as the lifeblood of the armed rebels, the NPA’s reign of terror and abuse against innocent civilians will be stopped.

While the Communist doctrines run deep in the community for decades, the villagers’ warped vision eventually turned clear when government projects and programs began to reach their village several years ago through the help of the government troops.

These developments are now being strengthened through the localized implementation of the President’s Executive Order 70 or Whole-of-Nation Approach to End Local Communist Armed Conflict which is being supported by the Provincial Government’s Executive Order 13 that bids to bring long-term program and services, especially in the conflict-affected areas.

Under the program, many developments have been introduced to the community. Among them are the road repair going to the sitio and livelihood support. Initial programs and projects were also committed by various national agencies for implementation which includes poultry production project from the Department of Labor and Employment (DOLE), Alternative Learning System from the Department of Education, cash-for-work programs from different agencies, and infrastructure projects from the Office of the Presidential Adviser on Peace Process (OPAPP) and the Provincial Government, among many others.

Governor Nelson Dayanghirang said that the villagers’ pledge of loyalty back to the government has a huge impact on the province’s peace and development campaign. “Slowly, the people have seen the government’s sincerity to give support and provide services to the people,” he said.

The Governor added that the villagers’ declaration of support to the government will pave the way for many future developments in the community which was once considered a domain of the NPA.

Over the last few months, the province has already received almost 200 NPA mass supporters who have signified their intention to wholeheartedly return to the folds of the law.