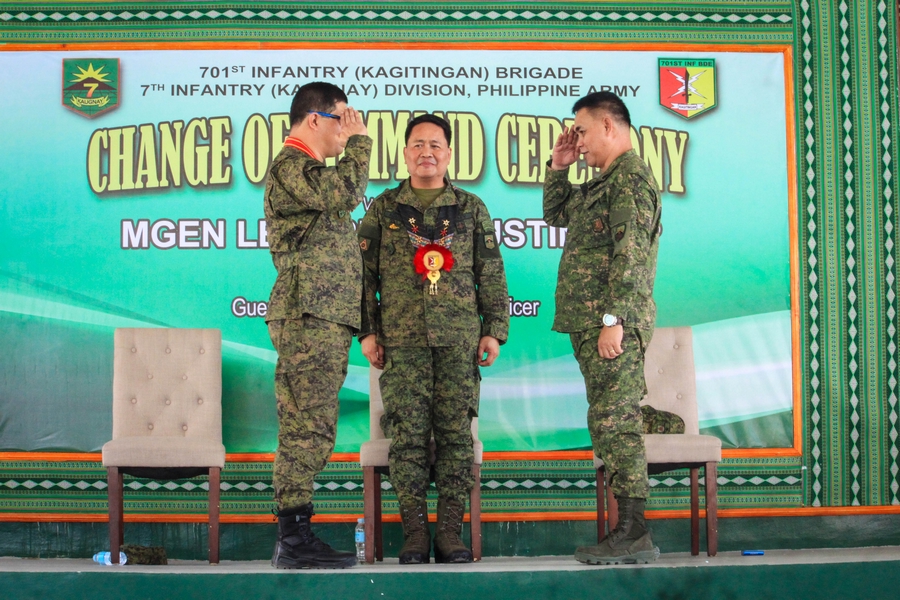 
DAVAO ORIENTAL – A rare “show of force” among top government executives was a spectacle to behold as they graced the historic change of command ceremony at the 701st “Kagitingan” Brigade in the City of Mati on Wednesday.

Davao Oriental Governor Nelson Dayanghirang, Davao de Oro Governor Jayvee Tyron Uy, and Davao del Norte Governor Edwin Jubahib – who are known for their huge contributions in gaining peace and order in the region – have come in full force to show their support to their peace and development partners from the military. The DSWD Secretary, Rolando Bautista, who is a former chief of the Armed Forces of the Philippines and a huge number of personnel from the Presidential Security Group also graced the event as the former chief of the PSG, Brigadier General Jose Eriel Niembra, was set to take over the command of the Philippine Army’s 701st Brigade whose area of responsibility covers the provinces of Davao Oriental and some parts of Agusan del Sur and Surigao del Sur, and Davao de Oro provinces.

The change of command ceremony on March 4, marked the beginning of outgoing Commander Brigadier General Manuel Sequitin’s new journey as he now sets off to assume a bigger role in the military organization. Relinquishing his duties, Brig. Gen. Sequitin turned over the command of the Brigade to its newly-installed commander, Brig. Gen. Jose Eriel Niembra.

As he welcomed the new commander, vowing to extend the same support the province has always been affording its military counterparts, Gov. Dayanghirang of the host province also took the opportunity to applaud the “sterling leadership” of outgoing commander Brig. Gen. Sequitin, who he says “has always been our province’s strong constant and reliable partner in all our peace and development initiatives.”

“Thank you, Brig. Gen. Sequitin, for giving your best by sharing much of your passion and genius with us. It has been a privilege and joy having you here in Davao Oriental. We will miss your ever warm and brilliant presence. With your worthy leadership, you have become a significant instrument not only in paving the way for change in the province but also in ensuring that the people are co-owners of that change,” said Governor Dayanghirang.

After fifteen months of serving as the commanding officer of the 701st Brigade, Brigadier General Manuel Sequitin bid farewell to the Kagitingan Brigade, leaving behind a long list of accomplishments, for which he is being lauded by the top local government officials in the Davao region.

Among his many accomplishments is the dismantling of weakened guerilla fronts 15 and 25 and Pulang Bagani companies 6 and 8, the dismantling of eight mass organizations affiliated with the Communist Party of the Philippines – New People’s Army, and the surrender of a total of 119 NPA members to the government. Moreover, 19 more barangays in Davao Oriental were added to the list of areas declared as insurgency-cleared.  Also, under his command, a total of 110 high-powered and low-powered firearms and 53 improvised explosive devices were recovered.

These accomplishments helped the Brigade gain two Kapayapaan Awards and other accolades from no less than the President Rodrigo Duterte, elevating the 701st Brigade to a Proficient Status in the Army Governance Pathway and getting the Gold Trailblazer Award.

Aside from these feats, the Brigade’s camp is continuously expanding through scores of infrastructure projects being funded by the provincial government of Davao Oriental. These include a high-end tactical operation center, officers’ clubhouse, multipurpose building, five-bay firing range, and a 14-bay motorpool, among others. Set for construction are new administrative building, two-story multipurpose buildings, reception center, new barracks, and ecumenical chapel, among many others.

The presiding general, 7th Infantry Division Commander Major General Lenard Agustin lauded the performance and developments of the Brigade under the leadership of Brig. Gen. Sequitin. “The bearing of your work is most felt and valued not only by the Philippine Army but the Armed Forces of the Philippines as a whole. You have accomplished substantial feats,” said Maj. Gen. Agustin.

For his part, Brig. Gen. Sequitin attributed the success of his unit not only to his military personnel but more importantly to the strong support of the provincial government and its counterparts at the municipal level and other peace and development stakeholders.

He cited the immense role of the provincial government under the leadership of Governor Dayanghirang whose strong vision and clear direction effectively channeled government services to where it should be heading which is in the grassroots.

“Davao Oriental is a province not like other areas. It is like an ideal benchmark of a province that is well led and efficient in every way possible. I have, time and again, expressed so much appreciation for the leadership of Honorable Governor Nelson “Sir Boy” Dayanghirang.  He has been an inspirational leader not just for me, but for all residents of Davao Oriental.  I sincerely thank Sir Boy for all the developments you now see inside our Brigade,” said Brig. Gen. Sequitin.

He, likewise, lauded Davao de Oro Governor Uy for his equally strong leadership and huge support to the brigade’s units.

Amid the transition, the new commander vows his full commitment to continue carrying out the Brigade’s mission and programs “for the people we are sworn to protect.”

“I am confident that with the support of our stakeholders from the government and private sectors, we will achieve our goals as a team. There may be some operational adjustments in the coming days as we review our campaign plan, but for now, continue your efforts in providing security and development to our communities,” said Brig. Gen. Niembra.

Gov. Dayanghirang, being the Chairperson of the Regional Peace and Order Council (RPOC), along with other governors in the region, is determined to meet President Rodrigo Duterte’s target to end the local communist armed conflict the soonest time possible.

Davao Region is known for its steadfast efforts in pushing for peace and development through the implementation of the President’s Executive Order 70 or the Whole-of-Nation Approach to Attain Sustainable Peace and End the Local Communist Armed Conflict.

Since last year, numerous interventions have been implemented on the ground which are aligned to the President’s program. Among them are the provision of basic services, livelihood and infrastructure programs, and capacity-building, most especially in conflict-stricken communities.

“When the people’s basic needs are met, there will be no reason for them to support and join the rebel group to rise against the government. That is why, we are truly grateful to President Rodrigo Duterte for crafting the comprehensive program for pursuing peace in the whole country. We are now doing it by fostering community dialogues, introducing community-owned projects, and creating communities of peace. This current program aims to promote and preserve a peaceful and livable communities where the people enjoy basic services and are actively involved in planning development and exercising governance,” said Gov. Dayanghirang.

Aside from the three Governors and the secretary of the DSWD, also gracing the occasion were 10th Infantry Division Commander Major General Reuben Basiao, and Davao de Oro Vice Governor Maricar Zamora. By Karen Lou Deloso/Photos by Rhea Shane Laureano