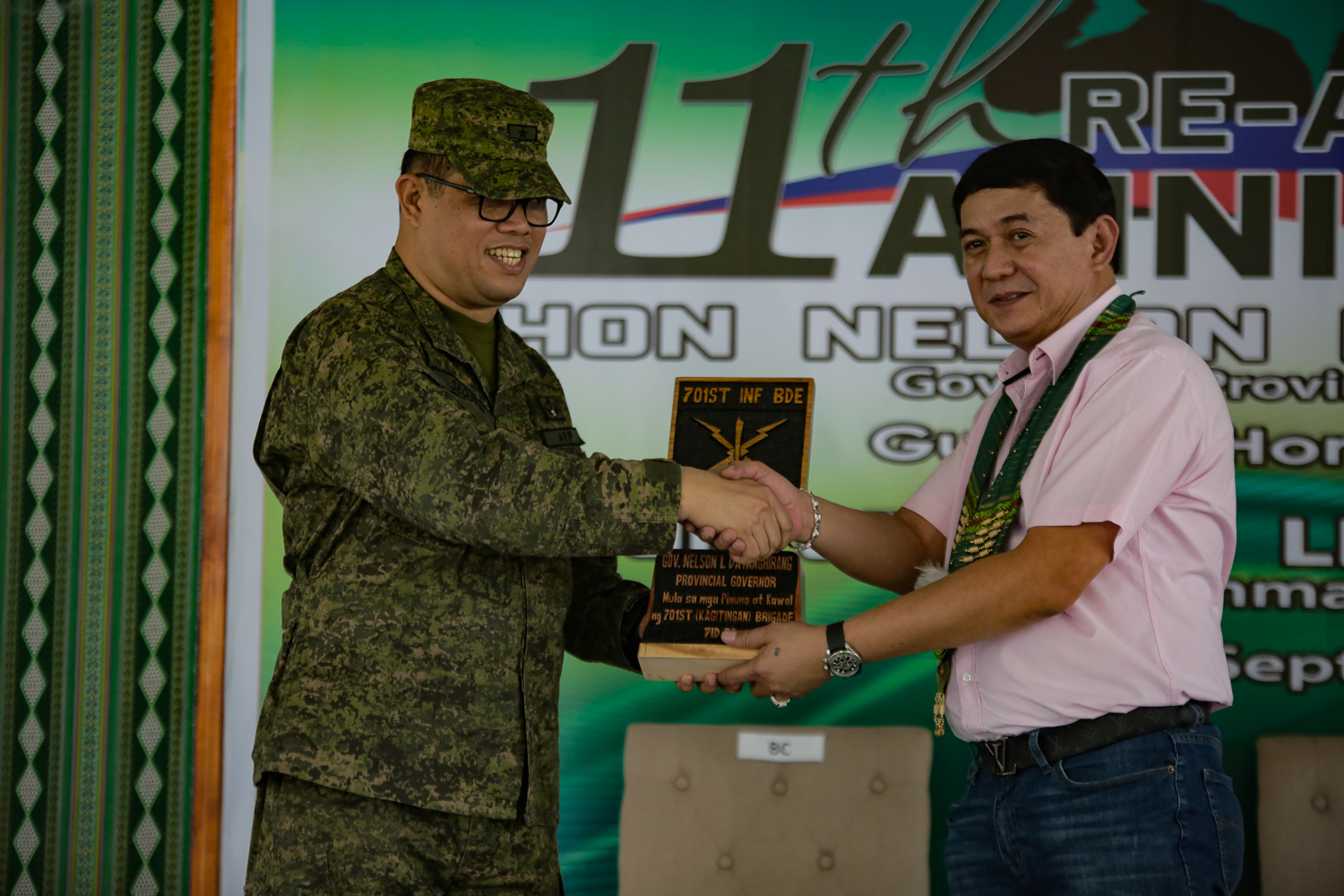 
DAVAO ORIENTAL – The Philippine Army’s 701st Kagitingan Brigade based here will soon have full ownership over the land it is currently occupying as the Provincial Government who currently own the property plans to give it to the military by declaring the three-hectare military camp into a Military Reservation Area.

“The Provincial Government plans to donate this land to the Philippine Army,” said Governor Nelson Dayanghirang, who was the Guest of Honor and Speaker during the Brigade’s 11th Re-activation Anniversary on Monday, September 16, at its headquarters in Sitio Magay, Barangay Don Martin Marundan in tbe City of Mati.

Governor Dayanghirang said the three-hectare property, wherein the biggest military camp in the province is situated, would be of more use if handed over to the military. He said that it is only fitting to turn the facility into a military reservation area since a lot of investments in terms of infrastructures have already been put up in the area, including the soon-to-be constructed ten million-peso administrative building being pushed by Compostela Valley Vice Governor Maricar Zamora and backed by 10th Infantry Division Commander Major General Jose Faustino, Jr.

Having secured the full support of the Sangguniang Panlalawigan, the Governor’s plan will ensure the permanent presence of the military here, thus, appeasing concerns over the Brigade’s possible transfer to other areas amidst the continuous dwindling number of the Communist rebels.

701st Brigade Commander Brigadier General Manuel Sequitin, who was elated to hear the pleasant news, thanked the Provincial Government for the highly anticipated development which is expected to be formalized early next year. “Once it is made into a military reservation, the military will not leave the area,” he said, adding that another wave of developments is set to be placed on the Brigade such as improved water system, among many other structures, thus, enhancing the living conditions of the troops.

During the anniversary program, Brig. Gen. Sequtin vowed to return the civilians’ trust to the military and will continue uphold their commitment to safeguard the peace here as he proudly listed the accomplishments of the Kagitingan Brigade’s eleven years’ worth of peace campaign in its area of operation under the sterling leadership of its past leaders. Among them are the Former Chief of Staff of the Armed Forces of the Philippines, General Rey Leonardo Guerrero and the current AFP Chief of Staff General Benjamin Madrigal, Jr.

He also listed the latest accomplishments of the Brigade. For the later part of 2018 up to present, the 701st Brigade has neutralized 80 NPA members and facilitated the surrender of 110 civilian supporters of Communist rebels, recovered 39 high-powered firearms and 40 low-powered firearms, 59 improvised explosive devices, and facilitated the clearing of 12 barangays which led to the dismantling of Guerilla Front 15 and Pulang Bagani Command 6.

Brig. Gen. Sequitin attributed the Brigade’s accomplishment to strong convergence with the civilian government and other peace and development partners.

“With all these accomplishments, which we could not have done this easily without your support, we share with you the Kapayapaan Plaque which was awarded to the 701st Infantry Brigade by the Chief of Staff, AFP besting more than 30 brigades of the Philippine Army in the entire country. And just recently during the Eastern Mindanao Command’s Anniversary, the brigade was awarded with two campaign streamers by the Commander, Eastern Mindanao Command recognizing the 701st Infantry Brigade’s exemplary performance,” said Brig. Gen. Sequitin.

“The 701st Infantry Kagitingan Brigade, being the factory of generals, is one of the country’s indispensable commands whose success in the past eleven years have become the foundation of our long-term peace agenda. This brigade has created a reputation of valiance, competence, and dependability not only for the vanguards of the region but to the whole of our formidable Armed Forces of The Philippines,” said the Governor.

“With our whole-hearted implementation of President Rodrigo Duterte’s Executive Order Number 70 To End Local Communist Armed Conflict, we have already posted significant accomplishments in terms of the reduction of enemy manpower, firearms and influence. Indeed, you are a big help to the people of Davao Oriental who continue to wage an unseen battle that is going on in our hearts and minds: it is the battle for peace, to see an end to the war against violence and the war against poverty. To our beloved soldiers, let everyone’s prayer shield you as you take refuge in the fact that no opposition is too strong and no war is too difficult against divine intervention. Let your faith in god’s mercy be your fortress in these challenging times. It is my fervent hope that you will all come home to your families unscathed and that you will be blessed with more resolve to successfully face whatever challenges may come as you discharge your functions,” the Governor added as he urged the Kagitingan troopers to “continue to inspire many others to join us in bringing real and lasting change not only in our province but in the whole country.”

During the anniversary, the Brigade conferred awards to military officers, enlisted personnel as well as civilian partners who became instrumental to the success of the Brigade’s peace campaign.