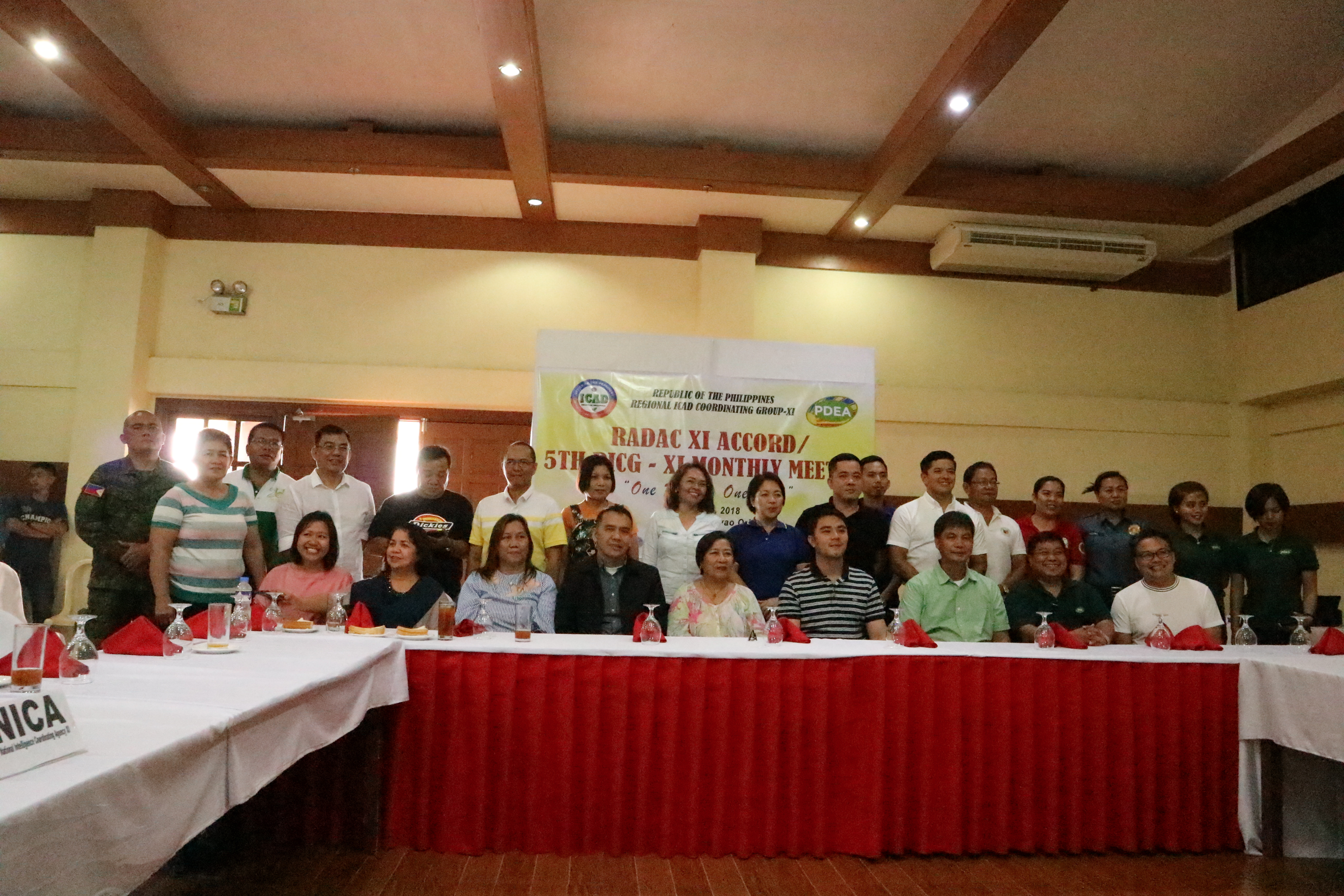 During the 5th Regional Inter-Agency Committee on Anti-Illegal Drugs Coordinating monthly meeting hosted by the Province of Davao Oriental on May 25 at the Lane’s Kita-anan in the City of Mati, the Regional Anti-Drug Abuse Council (RADAC) was launched to effectively cater to the needs of the local Anti-Drug Abuse Councils to effectively implement CBRAP.

According to Jay Valderrama, global trainer for Colombo Plan Drug Advisory Programme, there are four components that the anti-drug abuse councils should integrate into their treatment protocol to ensure an effective treatment of the drug reformists.

“Based on universal practice about treatment protocol, supposedly we have four components that should be practiced like the pre-treatment, primary year, continuum year, and case management. In my own personal experience, in most practices they stop in primary year while others don’t have practice in treatment planning. What they do is they go to the next activities but supposedly the basic component of primary treatment which is first and foremost psychotherapy should be administered first. Psychotherapy includes individual or group counseling, psycho education, and family program. Also we have pharmacotherapy for clients who need medication because there might be some co-occurring illnesses which might cause depression and other medical problem that needs to be addressed”, explains Valderrama.

Contrary to the practices of most anti-drug abuse councils, Valderrama underscores that a recovering person should undergo CBRAP for two years. Within the period, the client should abstain from using illegal drugs for him to recuperate from brain lesions caused by the drug abuse.  He said that the client’s abstinence from using illegal drugs while undergoing CBRAP in an outpatient setting will be guaranteed by conducting drug testing thrice a week.

Due to the lack of facility compared to the number of drug reformists, Michael Denton Aportadera, CADAC Chairman of Davao City, said that convergence of effort in the barangay level is important in the rehabilitation process. He said that the drug reformist should undergo CBRAP in the barangay where he resides, in coordination with the health volunteers, barangay functionaries, Philippine Drug Enforcement Agency, and Philippine National Police.

He said that the City Government of Davao, under the leadership of Mayor Sarah Duterte-Carpio, is willing to extend help to any provinces or cities on the war on drugs.

“We will tailor fit everything; this is the start of it. So we will get everybody on board to unify the rehabilitation treatment. The Davao City Government is open to help the neighboring municipalities, especially Region XI. The mayor would want to extend help to anyone who needs help in the fight against illegal drugs”, he said.

Since the implementation of the province’s own version of CBRAP called Lihok NLD (Nagkahiusang Lumulupyo kontra Droga) on July 2017, there has been a total of 1, 460 graduates of the program. These graduates have undertaken CBRAP through the effort of Anti-Drug Abuse Councils in the City of Mati and Lupon and Banaybanay town.

Currently, there are 5,564 enrollees of the Lihok NLD from all over the province.

Led by Governor Nelson L. Dayanghirang, the provincial government here has also gained positive grounds on its campaign against illegal drugs. Out of 186, there are now a total of 148 barangays cleared from drugs and eight municipalities officially declared clear from drugs out of 10 municipalities and one city.

During the launching of RADAC, Governor Dayanghirang, in a speech delivered for him by former Mati City Councilor Rosendo Linsag, commended the effort of Anti-Drugs Abuse Council and other stakeholders for its achievements in eradicating drug menace in the province.

“Let me commend the Regional Inter-Agency Committee on Anti-Illegal Drugs Coordinating for your steadfast advocacy on effectively eradicating the illegal drugs trade. It is our duty to uplift the welfare of our people that is why we give utmost priority to this flagship program of the national government. We really have to strengthen our coordination and integrate all our efforts and strengthen the partnership of all stakeholders to help solve the most serious problem of illegal drugs. I believe this program will bring out the best in us as it challenges us to become the best prime movers of a government program that is worthy of emulation and recognition”, the governor said.

“We shall mobilize everyone especially for the information campaign against illegal drugs use. And I call on everyone especially those occupying the seats of power and authority not to lower our guards. Let us double our efforts, or triple it if need be. We should not stop until the last drug lord in our community, the last financers and last pushers have surrendered or put behind bars. As governor of this province, I will be with you all the way. Let us pledge our full support in this program. We will win in the war against illegal drugs”, he adds. Photos by Joel Owano